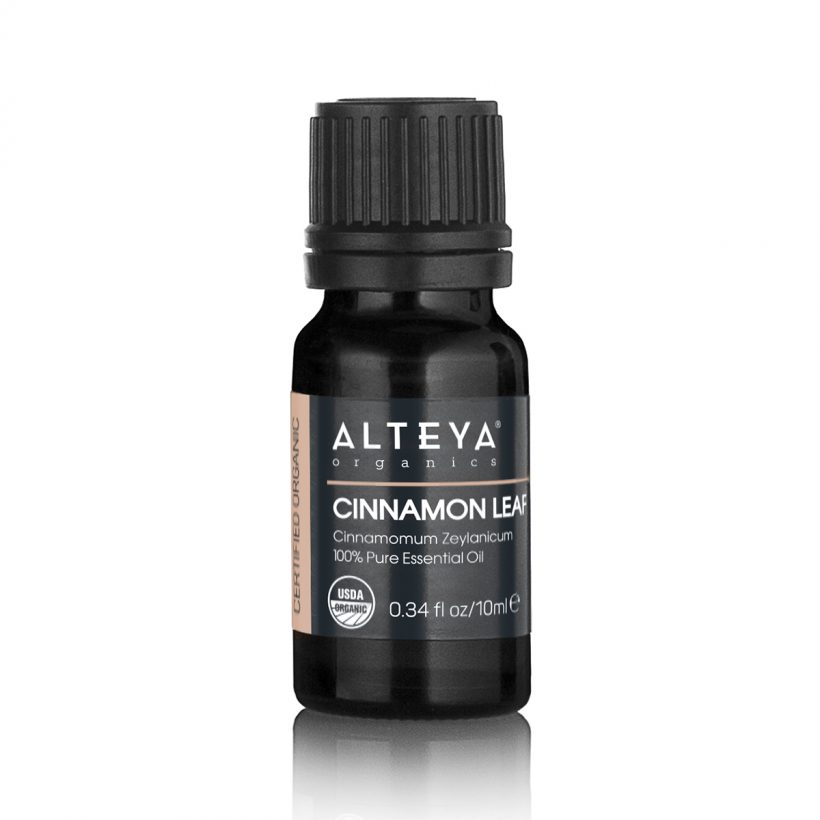 Cinnamon is a well-known spice, widely used not only for culinary, but also for therapeutical purposes, and traditional and herbal medicine.

This essential oil is derived from the small evergreen tree, called Cinnamomum Zeylanicum. The leaves of the tree are steam-distilled to produce this fragrant essential oil. The aroma of cinnamon leaf oil is softer and more delicate as compared to cinnamon bark oil, but still carries the signature spicy- sweet cinnamon smell. Cinnamon Leaf oil characterizes with higher eugenol content compared to Cinnamon Bark oil, which makes it ideal for purifying the air from harmful bacteria. It also supports the immune system and is a great addition to a DIY insect repellent.

In aromatherapy, Cinnamon Leaf oil is reputed to create a positive atmosphere and relax the body. At the same time, it is known to stimulate the mind and improve mental focus. This essential oil is a frequent ingredient in perfumes, as it adds warm notes to floral accords.

Loaded with potent antioxidants, such as polyphenols, that help protect the body from oxidative damage caused by free radicals, often responsible for premature aging.

It is believed to stimulate blood circulation. There is a beneficial warming sensation when the diluted oil is applied topically.

Its warm aroma is known to boost mental energy and libido.

*For educational purposes only. These statements have not been evaluated by the European Medicines Agency. This information is not intended to diagnose, treat, cure, or prevent any disease.

Diffuse cinnamon bark oil to purify the air and to support the immune system in the winter months.

Dilute cinnamon oil with a base oil to use as a massage blend to relieve stiffness and tension.

Add a drop to your daily moisturizer to achieve a younger-looking skin.

Add 1-2 drops to your shampoo to balance scalp and promote a healthy hair growth.

Always dilute. Possible skin sensitivity. Keep out of reach of children. If you are pregnant, nursing, or under a doctor’s care, consult your physician. Avoid contact with eyes, inner ears, mucous membranes and sensitive areas.